Let’s see what we’ve been up to…

This month, Joel and I started making a big vat of chicken, veggies, and rice stirfry (and peanuts sometimes!) on Sunday night, and packing our lunches for the week. The first three days I was like “seriously? Chicken and rice again?” but now it’s not a big deal. And since we aren’t taking dinner left overs for lunch anymore, our dinners stretch further. Now we’re only making 2 or 3 additional meals, not 5 or 6. It’s cut down on our groceries bill, take out lunches almost never happened (I forgot my lunch once – whoops), and neither of us have had food poisoning (although we’ve started the “new rice after 3rd day” rule). We’ve switched up the stir fry sauces and used hokkien noodles instead of rice a couple times, but overall, it’s the best meal plan step we’ve made. And the cost for a week of lunches = $15.00; $13 if we make our own stir fry sauce. Not too shabby.

Joel took family photos for our Nye family friends, which meant a day of hanging at the studio with pals and adorable kiddos, and an evening of building legos with the other Henri in my life, and holding 3 month old Amelie. Holding a sweet sweet baby in our apartment while watching Star Wars and hanging with pals? My biological clock maybe went into overdrive by about a gajillion. Let’s not even talk about catching Joel giving Amelie a tiny kiss on the top of her head.

and seriously, high 5 to Craig who will only let his kids watch the un-retouched version of the trilogy. High 5.

Joel took a two week staycation holiday a the beginning of the month, and we might have had a couple days where we didn’t move from the couch. Which was fine by me. It was so good to have him home and happy for so long – even if it did make me incredibly jealous. haha. And if you haven’t had caramel milk, then you should. You don’t know what you’re missing*.

I woke up from a dream in which I made a cake from scratch. I was low on funds, and we’ve been trying hard not to eat sugary desserts every day, but I really wanted to make a cake. So I looked through my trusty Back in the Day Bakery cookbooks and picked out the Baby Party Cake with Buttercream frosting.  Joel gave me $20 and I ran off to the store to buy flour and butter because I knew I was running low. But it wasn’t until all the butter was measure out, the eggs separated, and flours and powders sifted that I realized I was short on sugar by a whole cup. D’OH. After an emergency google, I substituted with raw sugar.

Then I read that I needed to whip the egg whites into peaks, but I didn’t have a second mixing bowl, or a second mixer, and my beaters were coated with cake batter that looked like cookie dough. I was going to skip the step, but then I remembered that women in the 1800’s made cakes with a whisk and their arm muscles. So I whisked egg whites for 10 [excruciating] minutes and sure enough, peaks formed. And as I folded them into my cookie dough, it almost immediately turned into silky cake batter. hu-fucking-zah.

Then, my brain deflated. First, I stared at a mixing bowl filled with powdered sugar and cubed butter and thought “this doesn’t seem right. If I mix this, I’ll get a powdered sugar bomb.” And I realized quickly that I forgot to beat the butter and milk first. Whoops. So I fished the butter out, emptied the powdered sugar, and poured in the milk. How much milk? About 3x the amount I needed. So, after using an entire bag of icing sugar and some corn starch, the icing was still runny. Hind sight tells me I should have added more butter and just doubled the recipe so it would have solidified, but I only just now thought of it. And I ended up with green icing. 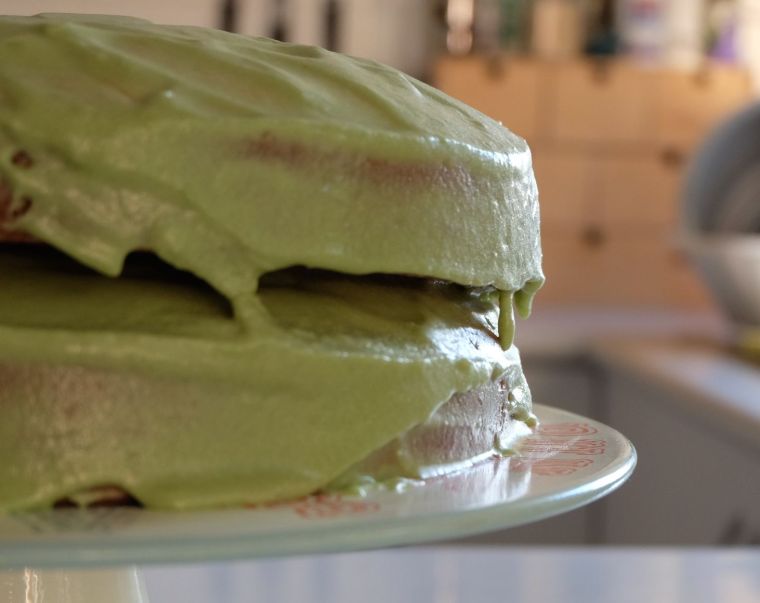 I was really not looking forward to eating the cake. It smelled yum, but the process and the icing made me think it was going to be a dried out mess.

Ohhhhh, was I wrong. It was the best cake I’ve ever had. It was the big cake version of their Old Fashioned Cupcake, which was life changing. So, I dubbed this cake Calamity Cake. It took us a week to eat it (will power was strong), and if I could make another one today, I would. Except I’d make sure I have all the ingredients first.

Our gallery wall, which we first hung in like, May? Fell within two weeks. Now, to hang photos on our cement walls, we have to use adhesive backed hooks and sticky tack. First, the adhesive has to dry on the hook for 24 hours. Then, it takes a lot of measuring and planning and measuring and planning and then sticking the adhesive hooks and hoping they were in the spot you want them to be in. Then it takes at least 2 weeks for the hooks to cure to the wall before you can hang the frames. Then you have to sticky tack the corners of the frames for extra support. It’s a long process. I just wanted the frames up, and we were tired and just wanted it done, so we skipped the measure/plan/measure/plan step and just fixed the hooks wherever and decided to move the frames around until it looked good. So that’s my long winded explanation about why the frames aren’t evenly spaced and why we don’t have a print in that long brown frame yet. Normally the spacing would drive me crazy. But, a) it’s finally a gallery wall and b) it’s so much better than staring at a white wall.

I went to the post office to get what I thought would be the FBI background check for my visa, but I also got a surprise package from my mom. Mom introduced me to Shirley Jackson when I was 9 or 10, and I’ve been in love ever since. I have well worn and well read copies of Life Among the Savages and Raising Demons in my books at home. Most people don’t know that in addition to writing horror stories, she wrote hilarious accounts of her time raising four children and trying to be a house wife. So good.

And the views weren’t too shabby

And now it’s September! It’s spring, I’m recovering from stomach flu, I’ve been in Sydney for a year now, and we’re on the track for a good month. Fingers crossed errryone!

*I’m a milk fan, which is great, because people here drink milk like it’s water. And so, there are heaps of flavours to choose from. Yuummmm