I love the simplicity of his show. I love how the sound of his voice is like a someone wrapping a warm blanket around you. I love his positivity, his “maybe… maybe…”. I love the way he says “whiiiish wiiiiiish wiiiiish” when he uses the fan brush to make waves. Every touch and every sound he makes is soft, gentle, and deliberate, no matter how “accident” he says they are. Whenever I’m watching The Joy of Painting with Bob Ross, I’m transported to a rainy day in elementary school, watching him in art class while we waited out the clock for Christmas Break. The whole show has a calming, tranquillizing effect on me, and I couldn’t be happier that there’s a whole heap of them streaming on Netflix.

I’ve had one of those days – can’t get out of bed, can’t have 1 thought without 47 thoughts behind it, can’t find a coping mechanism besides sleeping that helps, just feeling restless and anxious and essentially paralysed. Eventually, I convinced myself to take a shower, and I sat down to scroll through Netflix, desperate for something to take the edge off. And I saw that Beauty is Everywhere collection of Bob Ross episodes. And I was all HECK YES.

Five minutes into the first episode, he was painting some clouds (using the number 2 brush in a circular motion so that “it looks like there’s a lot happening”), and he said it was going to take a while to finish. Then, he says “… while I’m doing this, I want to show you a video of some little characters that are living with me – baby squirrels. And I want to show you how we feed them.”

And then there was a video of Bob Ross holding baby squirrels and feeding them from a syringe attached to a creepy looking extra long nipple. 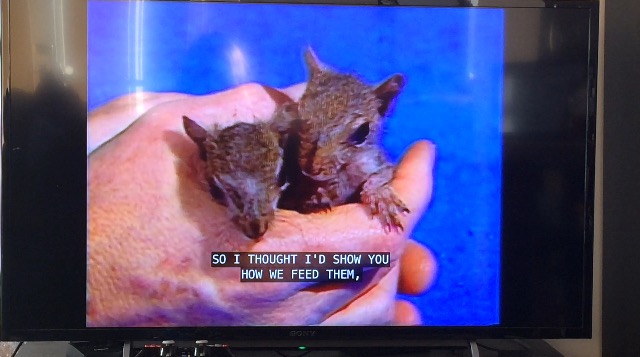 I g-damn love squirrels. They’re wiley, they’re fluffy, they make really questionable decisions, and they’re adorable. When I was 14, I created a character called Squirrel Man, a Jewish Crime Fighting Squirrel who wore tighty whities and a red cape, and never went anywhere without his truth seeking acorn. I have a bit of an obsession with them. And very sadly, they’re not in Australia.

Bob Ross and baby squirrels. Two of my most favourite things. It was like God reached down, patted me on my head and told me, “everything is going to be ok.”

And it was. For a little bit anyway, which is cool.

Follow Audpodge and Blither Blather on WordPress.com
Join 215 other followers