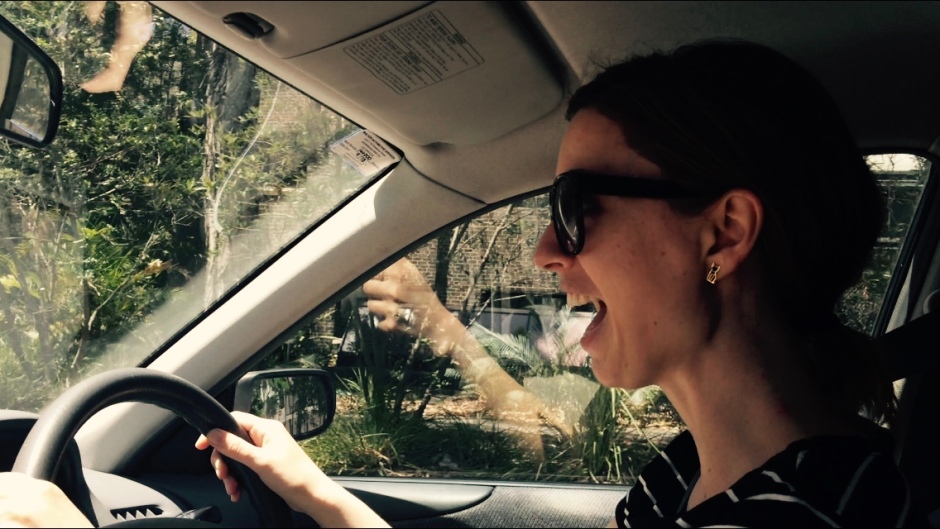 I remember my very first time on the open road. I turned 15 and 9 months – the state of Maryland’s minimum age for obtaining your learner’s permit – and scored my learner’s permit on the first try.

My dad and I had driven to Virginia to drop off my cousin with her mom, and we stopped at a store to get a drink on the way home. I walked over to the passenger side, and my dad said “Hey, why don’t  you drive home?” I hadn’t even thought about it – I hadn’t done much driving beyond circling the block trying to figure out how to start in manual transmission (spoiler alert, it took me 6 months to figure it out). And we were in another state, during rush hour, and it was an hour down a 4 lane high speed hi-way to get home. And at this point my parents still drove a giant Volkswagen van. Also I was an idiot 15 year old (and deep down, I knew this). But God love my dad, he’s always had way more confidence in me than I do.

It took me almost 5 minutes to get out of the gas station parking lot because I was terrified to move the giant van forward, scared to death that I was going to hit something. It was awkward to crane around to reverse and look into mirrors and figure out where the fuck I was in the scheme of the universe, in this huge piston engine on wheels. The only thing going through my head was I AM IN A DEATH MACHINE, WILLINGLY PUTTING MYSELF IN A CONCRETE ARENA WITH OTHER DEATH MACHINES BEING DRIVEN BY REGULAR PEOPLE AND I AM NOT QUALIFIED TO DO THIS. I managed to somehow get out of the parking lot, turn left into traffic (AGHHH), and merge into even more traffic (AGHHHH), switch lanes (AGHHHHHHHHHH!!) and make it home during stop n go traffic without incident to property or persons. I was white knuckled the entire time.

But, there’s nothing like a baptism by fire to get you real knowledgable, real fast. After that one terrifying, seemingly endless drive home, I was ready to drive anywhere. By the next week, I was driving anywhere that I could, in any car that I could get. I finished my permit requirements, nailed down stick shift, got my license, and was unleashed on the roads at the ridiculously stupid age of 16 (seriously, what kind of country lets 16 year olds drive unsupervised?)

That being said, I didn’t think I’d ever get that nervous behind the wheel again. That is, until I sat behind the wheel on the right hand side. Which I did. Today. And I lived, which you know, because I wrote this blog and you’re reading it. (Or did I really die? Am I ghost? READ ON TO FIND OUT)

My friend Josien offered to take me out to brunch and then give me a driving lesson, since my OFFICIAL license came in the mail last week. Brunch was delicious, and since it’s school holidays, she took me to Macquarie University to drive around the empty parking lots. I was excited to drive again – it’s been 2 years and I do miss it – but as soon as I sat down, ALLLLLL AT ONCE, I felt like an idiot 15 year old again. I felt those familiar awkward omg in a giant death trap feelings again, and I was sure I was going to kill someone. #confidence 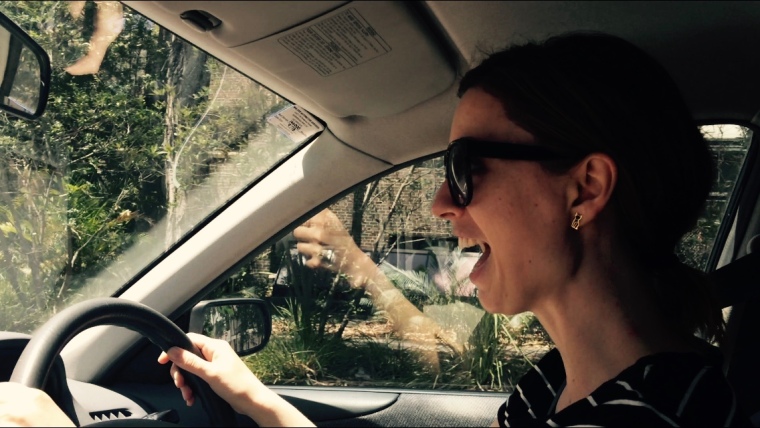 There is heaps more to get accustomed to beyond remembering to turn into the new correct lane. For starters, the indicator (or blinker, if you’re American) is on the right hand side, and the wipers are on the left. Number of times I turned the wipers on by mistake – 2 (this is called the “European Wave” here).

Because you sit on the right, you have to turn your body to the left to look behind you, which is weird. You also have to use your left hand to switch gears (I drove an automatic today, so I haven’t had that challenge – yet). It doesn’t sound hard, but it proved to be awkward. Especially because I’m used to having the left hand mirror as my primary, and the right had mirror as my secondary.

Roundabouts are EVERYWHERE. They aren’t just on the fancy new roads. Buses, buses are also everywhere and they’re huge. And they will eat you.

Turning right into the far lane instead of the inside lane is something I don’t think I’ll ever get used to. I’ll never take lane markings or arrows for granted ever again.

Josien was wonderful and let me drive the same circuit about 10 times while I got a feel for things, and we cracked jokes and sang car songs and she didn’t freak out when I humped the curb. And then did it again in the exact same spot. But I missed a turn and ended up headed toward the ACTUAL REAL ROADS WITH CARS and I promptly pulled over and declared the lesson was over. I knew it would be better to just get it over with, but once I saw the intersection with rushing cars and lights and buses, I reached my anxiety threshold. There would be no baptism by fire today.

At least not in a car I’m not insured on.

And thus, I survived my first time on the left. I desperately need a road safety course, more time on the road, and actually — I need a car. A car would help. But that sounds like Next Year’s Problem. For now, I’ll take borrowed rides from saintly pals.

3 thoughts on “On the Road Again (or, for the first time)”

Follow Audpodge and Blither Blather on WordPress.com
Join 215 other followers