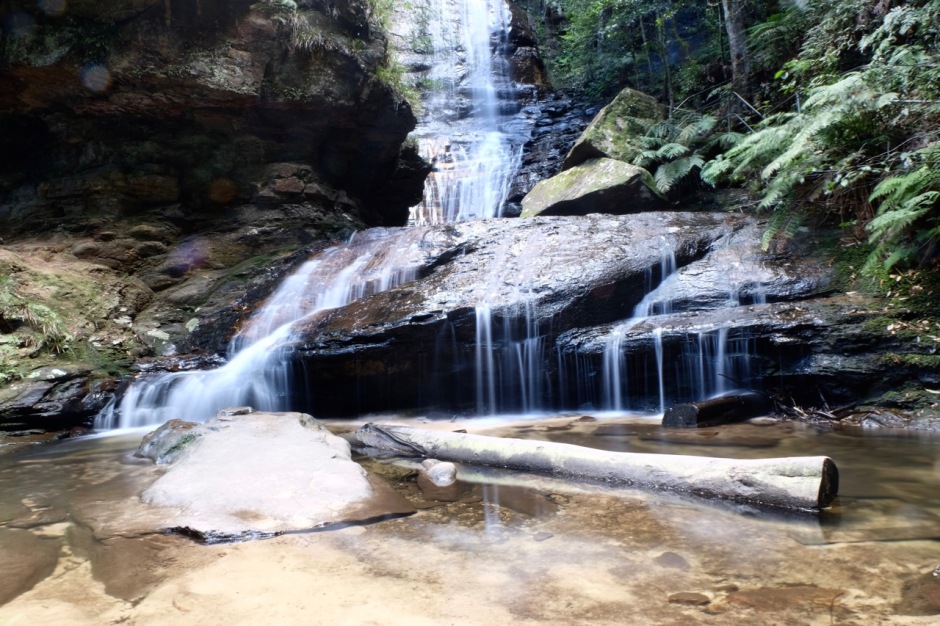 You guys – after nearly 3 years, I got to see the Blue Mountains.

There has always been something stopping me from getting there – mostly because I wanted to go with Joel the first time I went, and our schedules, the weather, money, and someone with a car just never lined up. But last weekend, the stars aligned. I bought some active wear (active wear!), we woke up before dawn, and set out with our friend Rob, his flatmate Eloise and her pal Oxanna to see Empress Falls in the Blue Mountains National Park.

After a traffic free, two and half hour drive, we reached the mountains. It felt cold. It felt like actual winter cold, with real frost in the air. So that was exciting. It was less exciting that I was wearing super thin, stretchy active wear pants and that didn’t do a thing to keep me warm unless I was moving in them (clever girl, active wear).

We parked the car and set out to begin our 3.5 km trail. I was too excited to get to the first look out to take many pictures, but I did see some killer rocks, and a pair of underpants in a tree (nature!).

Eloise and Oxanna and I had never been to the mountains, so when we reached the first look out, there were collective OOooOooOOo’s and AAAaaaAAAhhHhHhhs. It was incredible. All the photos I’ve seen, all the movies they’ve been featured in, nothing does them justice. And seeing the bright white cockatoo’s flying against the green trees was beautiful. It’s like looking down at a masterpiece.

We continued down, down the trail, down the trail steps, down the rickety wooden stairs, down the slick, narrow, metal stairs, and we finally got to a valley that looked straight out of Ferngully. Or even Jurrassic Park. All rock walls and hanging plants and waterfalls and boulders. 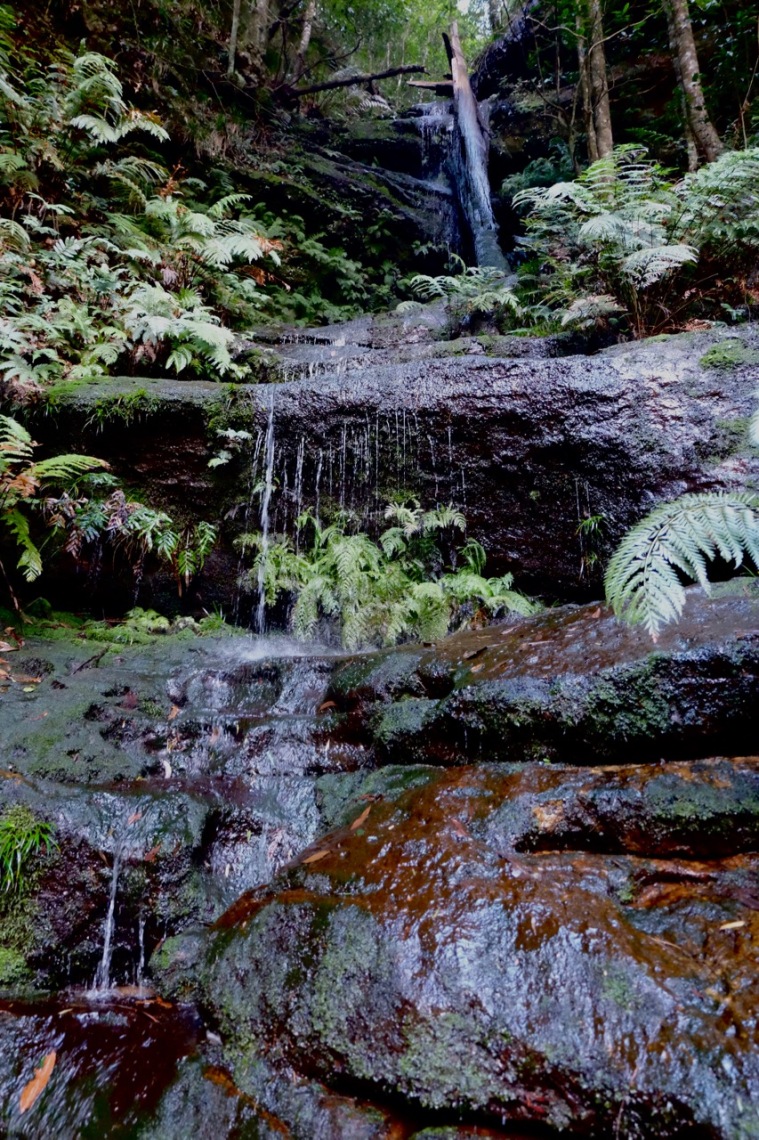 And there we got our first look at Empress Falls. 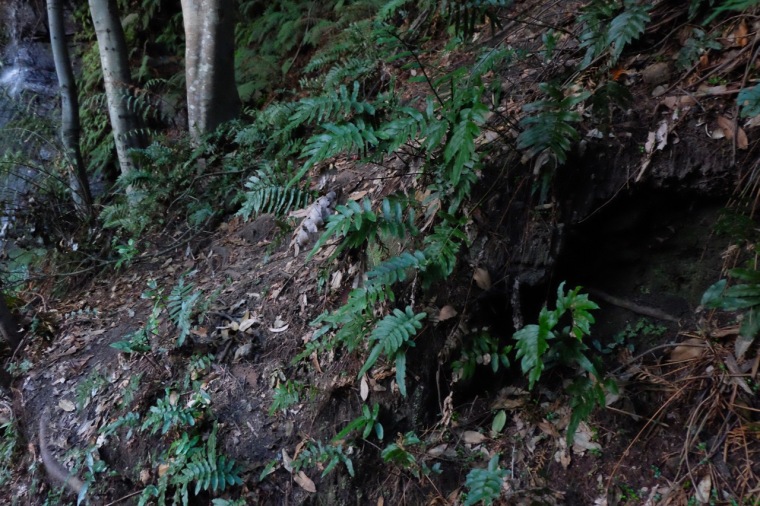 It was absolutely beautiful down in the valley. We were down far enough for the sun to barely touch us, and we were surrounded by so many trees and water falls that it felt like walking in a rain forest. I felt like I couldn’t take enough videos or pictures, like I was trying to memorise the entire scene with my camera. It’s just beautiful. Also I kept waiting for a dinosaur to jump out at me. 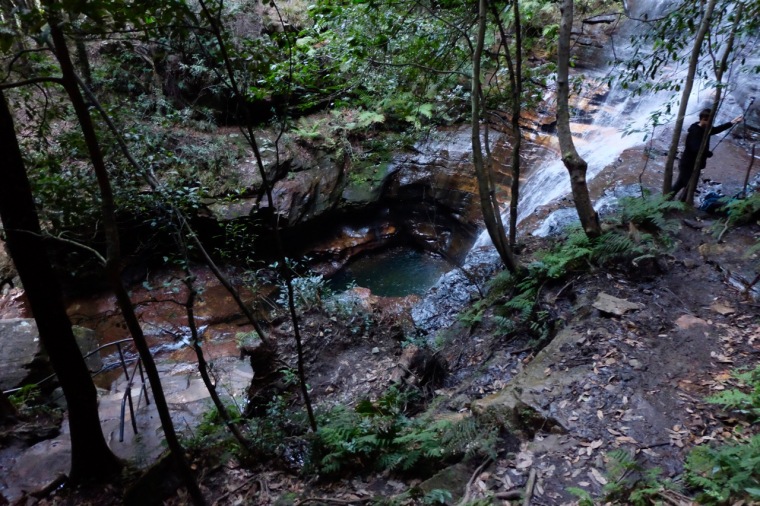 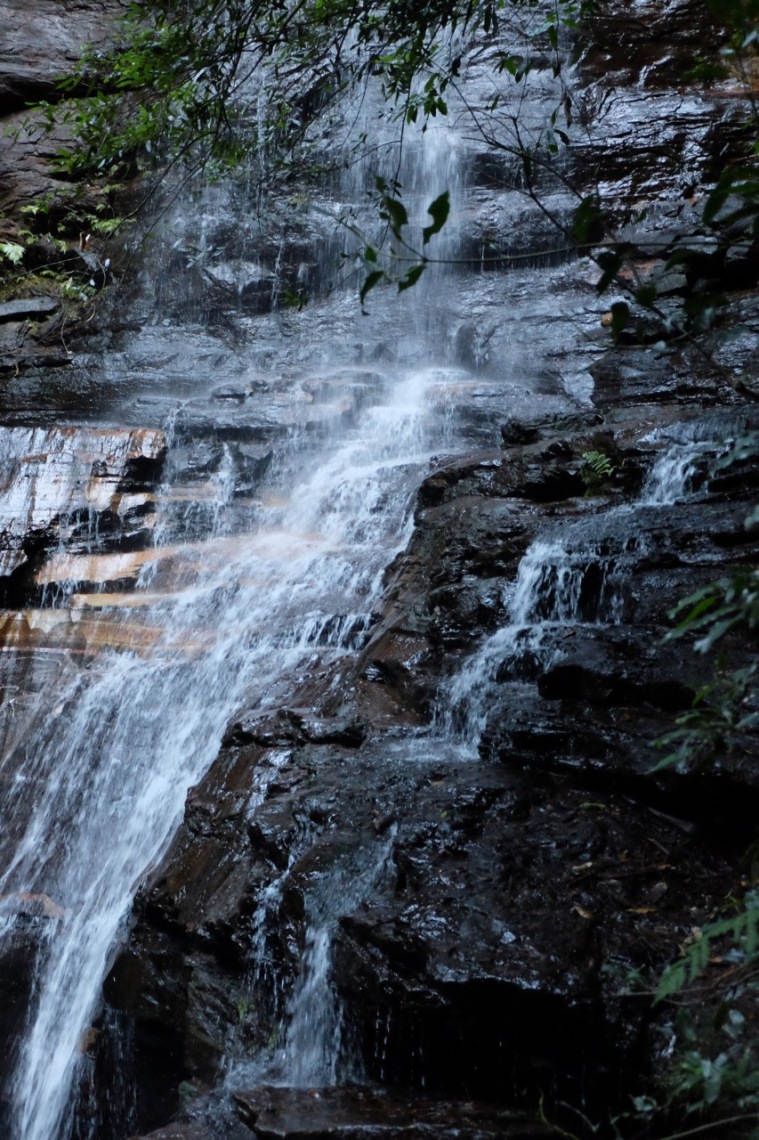 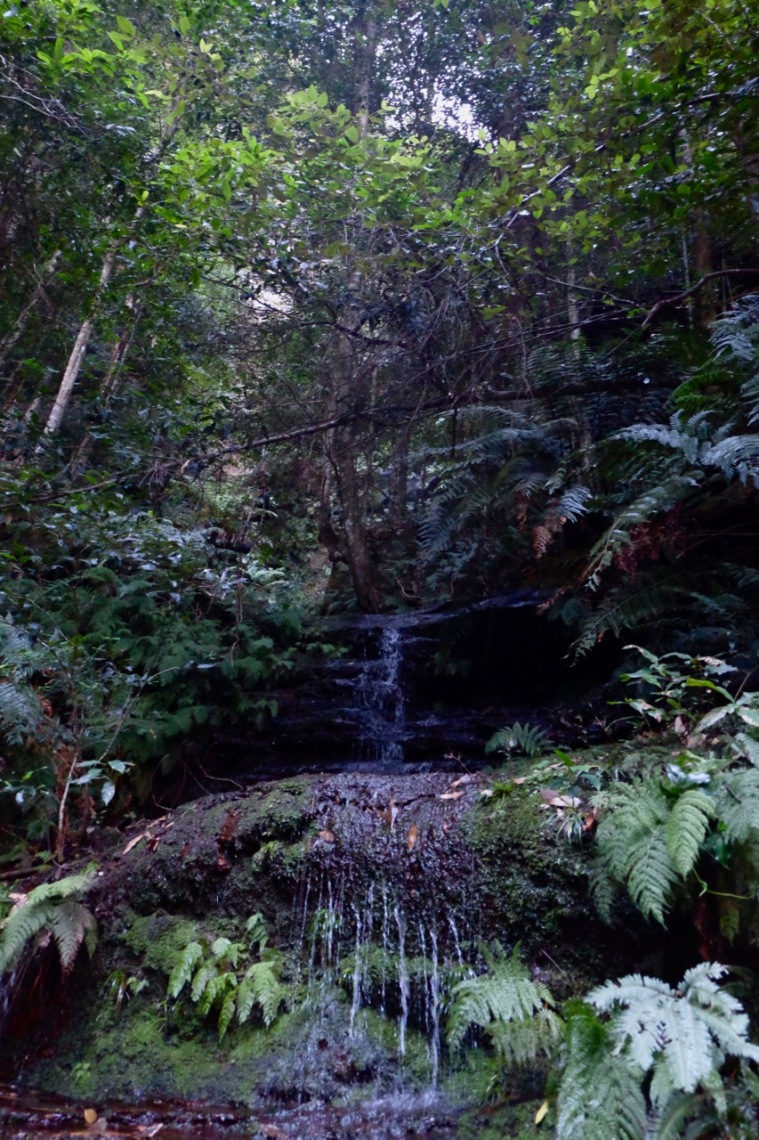 It was so still and quiet. Since we made it there so early, there weren’t many people around besides us. All you could hear was the waterfall and the birds. No planes, no cars, no people, no phones buzzing. Everything smelled wet and Earthy. I felt the cold air settling in my lungs. It was phenomenal. 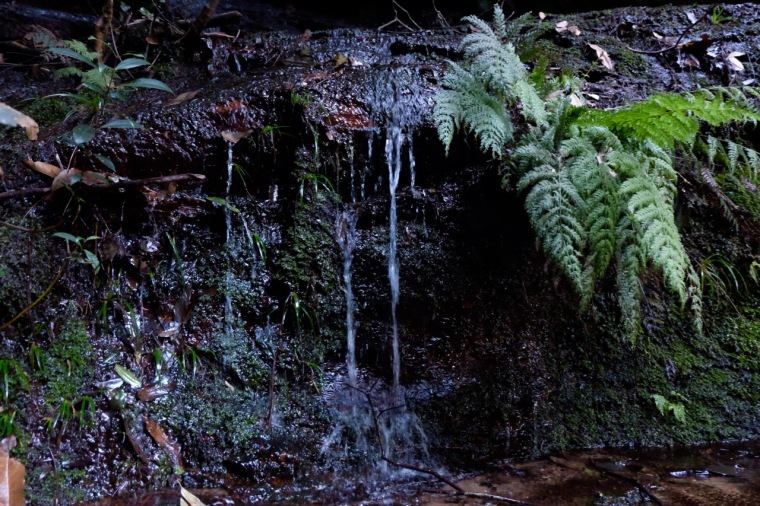 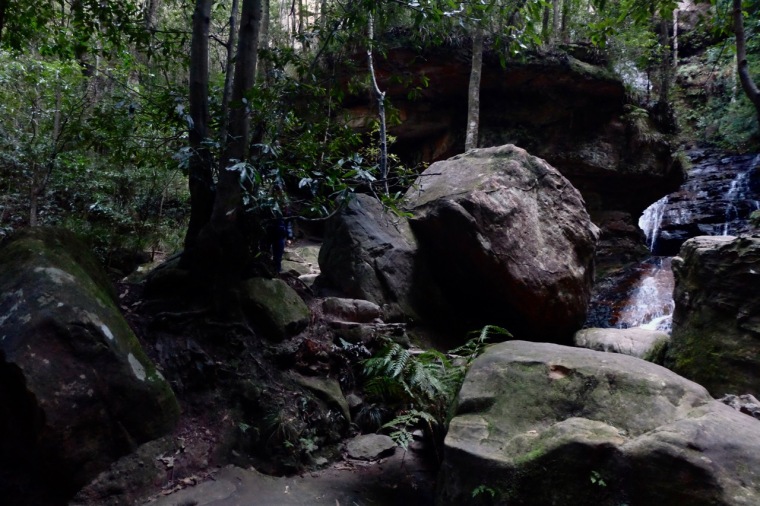 Joel and Rob spent a lot of time getting photos of the waterfall.

At one point I took out my book, sat on a rock and read a couple of chapters. Totes felt one with the world and nature — sitting outside in the almost sun, listening to the waterfall, breathing in the pure mountain air, wearing my active wear— and I was nearly overwhelmed by how lucky I was to experience all this splendour and solitude and how I should do this more often, when I realised my butt was frozen to the cold rock and I almost pulled a muscle when I extricated myself from it. And then I slipped on the moss when I got down and nearly fell in the water.

Eventually the photographers packed up and we all continued down the trail the next waterfall, Sylvia Falls.

I could have stared at this waterfall all day. It was beautiful. We got there right as the afternoon sun was hitting the rocks perfectly — it was hazy and glittery and very much dreamy.

The sun was also casting amazing light on the trees above us. At this point the tip of my nose and my finger tips were insanely cold (yassss winter cold) and all I wanted to do was take a nap in that sun. But I liked the look of the highlighted gum trees and the dark shadows where the light didn’t touch. Yeah, I had Mufasa’s voice in my head the whole time.

After spending some more time with Sylvia, the moment I had been dreading since we made plans to go to the mountains finally came. It was time… to hike back up to the car.

I’m woefully out of shape. Like, I have the cardiovascular endurance of a 700lb diabetic smoker who’s been bed-ridden for years. It’s baffling to the doctors I work with, who think I must be asthmatic to get excruciatingly, painfully winded with even moderate exertion, but really, I’m just horrifically unfit. Climbing stairs makes me winded, and the slightest incline makes my thighs hurt. And with every step I took going down on the initial journey, I knew that would be one more step going up on the return. So I said a little prayer to the active wear Gods and started followed the rest of my team up the first set of stairs.

I quickly realised Eloise was behind me. I let her pass in front of me, saying “I’m going to be really slow, you won’t want to get caught behind me.”

And it was true. Just climbing the short bit of rock stairs between Sylvia Falls and Empress Falls left me gasping and pretending to video the guys ab-sailing so I could catch my breath. Joel hung back with me and pushed me up parts of the stairs, and stopped with me whenever I started seeing stars and needed to stop. I was trying to be positive, trying to feel the inspiration of my active wear and JUST PUSH THROUGH IT! NO PAIN NO GAIN! HUSTLE GETS MUSCLE! INSPIRATIONAL PHRASE but all that kept running through my head was Sam telling Frodo that they needed to save the elfish bread for the return trip home and Frodo looking at him and being all “yeah, we aren’t making it home.” I was quite certain I would die, even as people twice my age were bounding up the stairs and that asshole fitness jock passed us jogging — again.

It took me about 20, maybe 30 mins longer to make the walk back to the car. I couldn’t breathe deep enough. My heart was straining from beating so fast, my lungs felt like steel wool, my ribs all felt cracked, my throat and nose were killing me, my head was splitting, and my arms and legs were spaghetti. My face was beet red and I was ready to collapse. At one point I tasted blood (I swear!). It was actually pretty scary. My chest and throat hurts just thinking about it.

But, I survived. And we made our way to the Conservatory Hut to have breakfast. And milkshakes. Because after facing death in the face, you get a milkshake.

We picked up some take away coffees and made our way to the car. I was warm, happy, and snug in the backseat, but too full of caffeine and adrenaline to sleep. When we got home, though, I was instantly so tired I couldn’t keep my eyes open. I slept for 2.5 hours and woke up feeling like I got hit by a truck.

I’ve been sick all week as a result of my cold-weather-over-exertion and resulting sinus/chest infection, but shit. It was absolutely gorgeous and I would do all again next weekend.

Except this time, I’d hire a helicopter to save me from the hike back.

Verdict: +10, will mountain again. Must get in shape, or I will die.

Onwards to the next adventure!