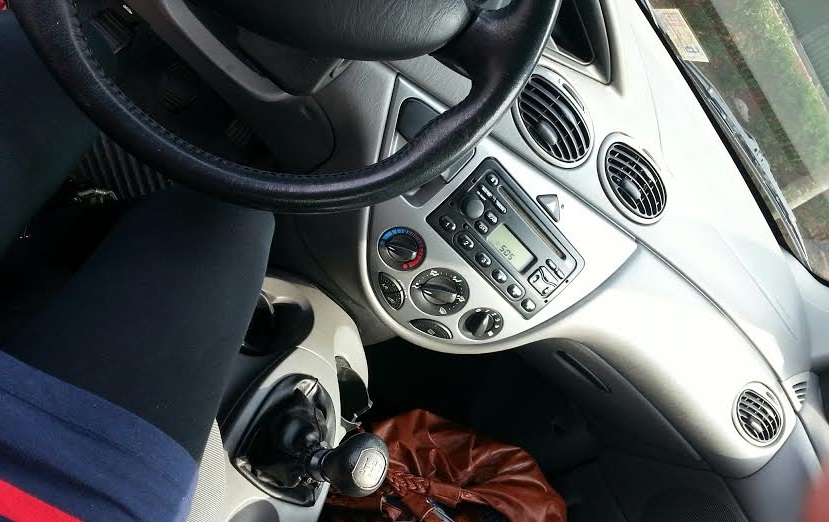 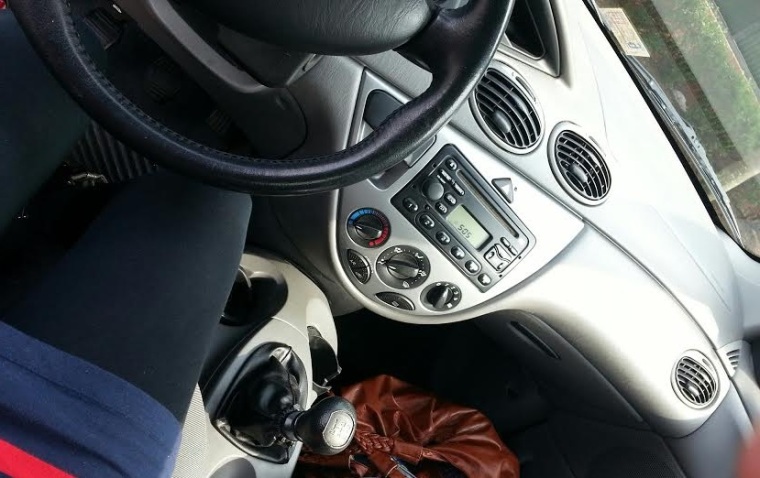 I have no interest in cars. They are machines that get me from one place to another. What I look for in a car is air conditioning and little secret compartments or cup holders to stash my phone so I can listen to Netflix as I drive (yes. You read that correctly). The fact that it had 4 cup holders–in addition to the fact that its dash board reminded me of a space ship–led me to choose my 2003 Ford Focus 8 years ago.

I am also incredibly lazy. And maybe the most lazy when it comes to cars. The amount of excess shit that I just casually throw into the trunk and into the backseat of that little burgundy hatchback piles so high that it looks like I’m living in my car. I mean, the number of times I’ve had to unload piles of clothing, shovels, trash bags, boxes, half my closet, bedding, a years worth of empty calorie evidence, and sometimes blow up sex dolls onto the side of the road in order to reach my spare tire while a AAA guy looks on, judgingly, is embarrassing.

Worse, though, the number of times a mechanic has scratched his head and asked me “well, how long has your check engine light been on?” is mortifying. In fact, I have 8 years of service records adding up to high four digits that establishes just how lazy I was about taking my car to the shop.

If I were a parent, and  my car was my child, I’d be charged for criminal neglect. I’d be the parent that sends their child to school un-bathed, in cruddy clothes, with 1/4 of a sandwich for lunch, and then, when it’s sent home from school because it developed bronchitis after I made it sleep without blankets, I’d get mad because I’d have to spend money on its doctor’s bills.

Maybe that’s a stretch, but it’s true. I took absolute atrocious care of my car, and then threatened to shoot it every time it cost me hundreds of dollars at the shop due to my own negligence. I’ve acknowledged this abusive relationship I have toward my car, and I’ve apologized for it. But that didn’t change anything. This summer, I paid over a $1,000 in repair work that my mechanic suggested I get done last year. And of course, I cursed my car and threw a million tantrums for buying such a piece of shit Ford. One of my personality flaws is that I’m a bit spoiled. And sometimes, I fully expect things to just take care of themselves. Including the upkeep of expensive, inanimate objects.

And yet, on Sunday night, as I scrubbed the 5 year old coffee and Slurpee stains off the driver’s side door, and as I vacuumed the eons of pet hair and human dander and peanuts and stray Benadryl pills and movie ticket stubs and random bits and trash from my life off the backseat floor, I couldn’t help but get a little misty-eyed. Because this time, I wasn’t cleaning out my little Focus because my co-workers made fun of me. And I wasn’t cleaning it out because my dad recommended I “de-skank” my car. I was cleaning it out because I sold it.

I won’t need a car while I’m in Sydney, because they actually have public transportation. Public transportation that actually works. And there’s a bus stop right outside our apartment. So I decided I’d sell my car for whatever I could get and use the profits to fund my move. But selling it wasn’t as easy as I thought it’d be.

First, I spent too much money on repairs so the A/C would work (spoiler alert, it still doesn’t), and so it would pass inspections and I could re-new the registration (or else get a giant ticket from the traffic cops). Then, I took it to CarMax, where I bought it originally, and after a 15 minute inspection and 4 minute appraisal, I was told by a salesman wearing a big floppy hat that they would pay me $500 for it, and they would scrap it for parts. Surprisingly, I felt like the vet told me I needed to put my dog down. I mean, yes, Focus and I had our differences, and I actively hated it about 80% of the time, but I didn’t want to murder it. Another one of my personality flaws is that I develop intense sentimental attachments to inanimate objects. And I couldn’t let something I’d spent my formative years go to a trash heap. It’s an old car, sure, but with a responsible owner, it’d have at least 6 years of life left. I held in the urge to tell the floppy hatted salesman to eat my dick, took my appraisal and left. I got home, and immediately put my Focus on Craig’s List–not for the vultures, but for that diamond in the rough Craig’s List user. I wanted to sell it to someone who needed a car. Not someone who wanted to gut it out and strip it. Or, I don’t know, set it on fire with a dead body inside it. With Craig’s List, you never know.

Ah, Craig’s List. You really can sell anything there. My ad was very straight forward and honest, even listing the repairs that needed to be made. I took pictures of the car in terrible condition: not washed, not scrubbed, not vacuumed. I barely cleaned out the backseat. And I got about 30 responses on the first day, alone.

Some responses were mildly alarming.

Can you send me a reply i won’t stop asking unless you say no, im a very determined young adult I’m a young college student wondering if you would consider giving the Vehicle away for free? It would  give me a big helping hand a-lot of people don’t get Please think about this . Thank you
(I wrote back saying no, but a part of me wishes I would have called his bluff)

Some were pretty amusing

(to which I replied, No, but I will trade the car for cash. I got no response.)

And most of them were this

SEND ME UR ADDRESS

WILL YOU NEGOTIATE I HAVE $100 WILL PAY CAHS

Eventually, though, I found a buyer who’s email decorum I felt was appropriate. She came to test drive the car over the weekend, and it was a good match. She was a young girl, just out of college, who desperately needed a car, and favored substance over flash. She fell in love during the test drive (it’s a shitty old beater, but it *does* drive like a race car), and offered to buy it on the spot.
It took me back to the day I decided to buy it on the spot. I was 21 and desperately needed a car. My mom spotted the Focus, then only 3 years old, in the parking lot after the salesman showed me 3 real boner-kills. I walked over, expecting to be unimpressed. But then, the car and I had a weird little moment. It was an overcast day, but the little burgundy hatch back gleamed. I sat inside and felt at home. Grey and silver interior! Knobs and buttons and things! Enough cup holders to hold my coffee cups and my cell phone! When I drove it, I knew I would buy it. 2 days later, I my financing was approved and I drove it off the lot.

I’ve had a lot of adventures in that car since then. Every important person and pet in my life has ridden in it. It’s gotten me home safe when I was in no condition to drive. I’ve laughed and screamed and cried and had many emotional break downs while sitting at the wheel. It’s been towed so many times. It’s taken me on many road trips with some of my dearest friends. It’s been there for my parents when they needed a cheaper way to drive half way across the country. I finally learned how to change a flat tire and (mostly) got over my fear of airing up tires with it. I locked my keys and cell phone inside it more times than I can count. It’s moved me in and out, and in and out again, and in and out again, of my parent’s house. It’s been a place of respite. Mostly though, it’s been there for me. Like a very expensive, high maintenance friend who always comes back after I call it “a pile of steaming asshole.” A friend who has tried desperately to teach me the same lesson over and over again, and that is to “pay attention, and be proactive.” Maybe one day, I’ll get it.

For now though, I have bid adieu. I watched as a new 22 year old lady put her license plates on it and excitedly showed it off to her boyfriend. I hope she has a bunch of adventures with it. I know I did.