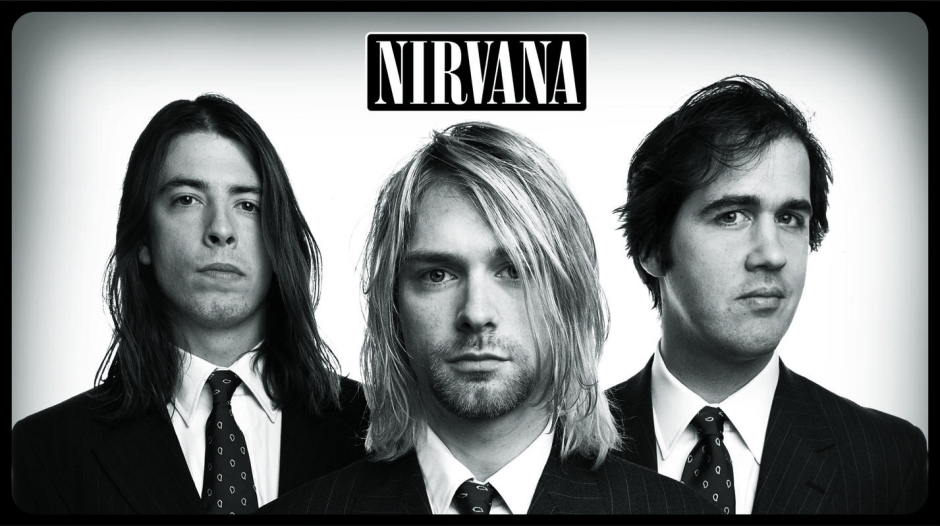 My family had just moved to Maryland, from Texas, the last stop on my dad’s glamorous military tour. Some kids got to go to Turkey and Hawaii and Japan. We got to go to Louisiana and Oklahoma and Texas. And finally the dead military base suburbs between Baltimore and Washington DC.

At some point during that move, we stopped and visited with my dad’s parents in Lexington, KY. We must have spent a week or so there. I was 9, and all I remember is my sister Mary, my brother Josh and I got to spend heaps of time with our cousins Ashley and Justin, who were about 3 or 4 years older than me and sooooo cool!

I have this distinct memory of when we pulled out of my grandparent’s neighbourhood. Josh was sitting in the back seat of our VW van, packed to the gills with 5 people, their things, yard sale finds, snacks, activities, and two sweaty, shedding beagles. He reached up and handed mom a cassette to play. He said “Justin gave this to me. It’s Nirvana and it’s really cool.” They played it, and I remember my dad hating it. My dad wasn’t a fan of modern music, just the blues–or at least that was all I could figure out, being an idiot 9 year old. After a few songs, Josh took the tape back and listened to it in his Walkman. I probably went back to reading Calvin and Hobbes or trying to draw or something. Basically, Nirvana’s Nevermind didn’t stop me in my tracks. I’m pretty sure there was an Ace of Base tape in my Walkman–this is the level of 9 year old idiocy we’re talking here. I liked it, because Josh liked it and I was determined to like everything he liked, but it didn’t touch me deeply.

Josh, on the other hand. He loved it. He must have listened to that tape until it wore out. And then he bought all their other albums.

Up until that summer, Josh was a 12 year old. A funny little punk who wore his cap backwards and who was whip smart and beloved by animals and literally good at anything he tried. He got into typical 12 year old boy trouble–fire crackers, matches, bike accidents, boys will be boys. But I look back at that summer as his turning point.

That summer, though, seemed to change things. He became obsessed with Nirvana. He and I would listen to their tapes and Josh would regale me with Kurt facts. “He was really stoned on heroin when they recorded this.” “He spelt his name Kurdt to make his parents mad.” He stopped listening to classical music, and stopped dressing like a little boy and started to refer to people as “posers.” I was terrified of becoming one, of being uncool.

Over the next year, Josh got a new, sketchy group of friends. He quit playing in the school band. He ditched his baseball cap and grew his hair out. He stayed in his room all the time. He started to become a moody teenager.

I don’t blame Nirvana for turning Josh into a moody, shitty teenager. And I don’t blame Nirvana for my brother’s increasingly poor decisions over the next few years. That can be blamed on a drunk relative, the next summer, filling Josh’s head with stories that my parents lied and betrayed him because they didn’t love him. Nirvana just happened to Josh at that perfect moment in puberty when rock stars suddenly become the only people who understand you. If it wasn’t Nirvana, it would have been another band. Josh just found one that looked like him and felt the same way he did.

Josh didn’t do heroin or marry a big lipped blonde woman junky, but he made a hard road for himself, and during his teenage years, his relationships with us were strained. And it was really hard on everyone. But in listening to Nirvana, we seemed to find a common ground. There were Nirvana albums all over the house. Mom said “All Apologies” was one of her favorite songs. Even dad gave in, and I heard him hum along to “Heart Shaped Box” once. Unplugged in New York became a staple on road trips and house cleaning days. Nirvana feels like our family band, someone that we all like and sing along to. Even at times when it felt like Josh would disappear and we would never find him again. And it was nice to have those moments of respite, to get a glimpse that maybe family life wouldn’t be fucked forever.

As I sit here, watching Kurt Cobain Montage of Heck, I’m actually tearing up. And it’s not because I’m a diehard Nirvana fan. I like the music, but I don’t connect with the lyrics–to this day they still sound like gibberish to me and I have no idea what they mean–and I don’t know consider Kurt Cobain to be a genius and mourn his death. I love Nirvana because I can’t hear Kurt Cobain’s voice or wear a flannel button down without thinking of those really happy moments in a sad time. As a family, we’ve all grown up and have mostly moved beyond the hard parts. But those hard parts leave a residue. And I’m happy that I can see little glimpses of good stuff throughout it.

Even if the good parts are a little grundgey.